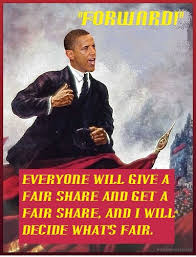 There are those who would say that President Obama may be charismatic,  but he’s not too bright.  When it comes to solving the countries problems,he just doesn’t get it.

I say that Barak Obama is a brilliant man. A man who has a clear vision of what he wants for this country, and knows how to manipulate the system and the public to make it happen. He has a genuine belief that he can save the country and bring prosperity to everyone.

In the President’s American Utopia, every one contributes as much as he is able into the governmental bucket and everyone only takes out as much as he needs. No one will ever have to worry about housing, food, or healthcare, the government will take care of it. No one in this country will ever again be homeless, hungry, or die for lack of lifesaving medications. Since we will no longer have to find a way to supply our most basic needs, we will be free from boring, soul sucking, dead-end jobs and will find fulfillment in all sorts of charitable pursuits instead. We can spend our days building houses for others, cleaning the shorelines, repairing roads, and growing crops, all for free since we will have no need for an income. Yes indeed, Americans will live in a paradise. Free from worry and want. Where nobody has to work, and yet everyone gets fed. We will be the envy of the rest of the world.

Does he have a plan to avoid the substandard housing, the bread lines and rationed medical care? Can he soothe the discontented masses?  Those who are not happy to merely survive, but long for a purpose and a way to prosper? Does he have the vision to correct the ideological faults that doomed his heroes to failure? No. He doesn’t need to. Lenin, Stalin, Mao and Castro were not worthy of the task. Obama is.

This is the dream that keeps us up at night.  A place where the government slowly and insidiously creeps into our personal lives and dictates every aspect of it.  From what we eat, what lightbulbs we can buy and even what kind of toilet we can flush nothing is made, bought or sold without government’s approval and cut of the profits.  Gone are our rights to our own homes and personal property.  The opportunity to use our hands and minds to create wealth will no longer exist. This is the America that many of us never think will happen. Maybe we are the ones who don’t get it.

The problem is that many people share Obama’s new American Dream.  How do you convince people who are working hard, pay their taxes and yet struggle to put food on the table, and pay their mortgages that it is not the government’s responsiblity to provide relief?  How do you assure someone who cannot afford the treatment they need that there are better alternatives to government health care? How do you persuade an entire generation raised on the liberal bias of the public school system and network media, to fight for the right to work and think for themselves?

This is the challenge Mitt Romney must face if he is to be the next president.  To reignite the passion for personal responsibility in a people who no longer value personal freedom.