Your Voice on The Safe Communities,Safe Schools Act of 2013

Congress is now debating Senate Bill 649 The Safe Communities, Safe Schools Act of 2013.  As the Obama administration continues to increase the strong-arm of the government over us, it is important that you contact your representatives and let them know your view.  We cannot depend on the media to accurately reflect the views of conservative America, they won’t be taught in the schools.  If we are to change the culture and return this nation to its once exceptional state, we must make our voices heard.  Here is an example of an email I sent to each of my state’s Congressmen.  Feel free to copy, edit, or write your own letter, JUST DO IT. You can find the addresses for your representatives here:  http://www.house.gov/representatives/

As a registered voter in the state of _________, I am informing you of my opposition to the various gun bills, specifically S. 649, the “Safe Communities, Safe Schools Act of 2013”, introduced on March 21, that are being introduced in Congress. As you debate these bills in the coming days, please keep the following in mind:

There is little evidence that any of the proposed measures would indeed reduce violent crime, however there is evidence to show that in many areas of the country where the legal ownership of guns is encouraged, violent crime has been reduced.

The Constitution guarantees our right of gun ownership for more than just hunting and personal protection against crime. It was clear from the other writings of our Founding Fathers, that gun ownership was a way to protect the citizenry from the overbearing tyranny of a government out of control. As an informed voter, I would strongly reconsider my support for a Congressman who votes in favor of any bill that would increase the stranglehold of governmental power, while decreasing my right as a citizen to maintain control over it.

Common sense dictates that one of the best ways to increase safety in our schools and communities is to improve services to the mentally ill. Our system now is a revolving door where treatment is fragmented and inadequate. Steps need to be taken to make it easier for parents, legal guardians and law enforcement officials to commit violently mentally ill persons for treatment. There also needs to be in place a system by which such persons are monitored to be sure that treatment plans are followed.

All schools should be required to provide adequate armed security based on the number of students and staff on the property, and funding should be made available for this purpose. This security could take many forms, from district created police forces, to support from local law enforcement, to the training and arming school staff. The choice on what form this should take should be left up to the local school districts.

Background checks are an important tool to keep guns out of the hands of convicted criminals and the dangerously mentally ill. I personally do not object to background checks for the personal sale of firearms. However the exchange of guns between family members, whether through sale, gift, or inheritance should be exempted from this requirement. Furthermore the checks should be accomplished using existing databases. There should not be any database created to track applications for background checks, or gun purchases.

We were all horrified by the slaughter of innocent children at Sandy Hook, but as terrible as these types of incidents are, it is important that as a representative of your constituents, you put the emotional considerations aside and base your vote solely on the constitutionality of the bills at hand. Our personal liberties are precious and come time for reelection, my vote then will be heavily influenced by your vote now. 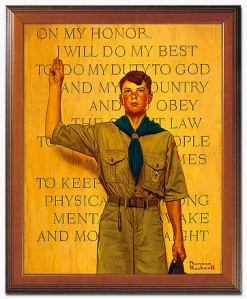 This coming May the Boy Scouts of America will make a decision on whether or not to allow gay people into the organization. As a scout parent, I have very mixed feelings about this issue. For more that one hundred years the organization has fulfilled a need that may be greater now than ever before. As our society increasingly seeks to emasculate the male gender, young men need a place where “boys can be boys” while still learning the foundations of integrity taught by the Scouting program.  The values enumerated in the Boy Scout Law, trustworthiness, loyalty, helpfulness, friendship, courtesy, kindness, obedience, cheerfulness, thriftiness, bravery, cleanliness, and reverence are values that are sorely needed in all aspects of today’s world.  From the White House, to the board room, to the schools, and the media, our society is yearning for men (and women) who will place personal integrity above their own needs for power and glory and wealth.  The kind of men Scouting  creates, and yet, this same society has sought on several occasions to tear down the tenets of Scouting as outdated or discriminatory.  This is a dark place for the organization to be in.  The issues are complex and weighty, and there is no solution that won’t hurt the program in some way.

The safety of the boys is the most important consideration in this issue.  The idea that allowing gay leaders would somehow lead to an increase in sexual abuse is based more on emotion than fact.  Homosexuality, and Pedophilia come from two different mindsets.  I would expect any leader, regardless of his or her sexual orientation to keep their private lives, private.  Just as it would be inappropriate for a man and a woman married or not to engage in sexual behavior during a Scout function, so would it be for a gay couple.  Because the standards of behavior for adult leaders are well established and could apply to any sexual orientation, removing leaders who violate the rules could be accomplished without valid accusations of discrimination.

Allowing gay boys into the organization is more problematic.  Navigating the hormonal seas of adolescence is difficult for any teenager.  Add in an immature frontal cortex, the judgement center of the brain, and you have a recipe for all sorts of bad decisions.  That is why coed groups such as Venturing, have strict rules of behavior.  Many of those same rules could be used in a mixed group of gay and heterosexual boys, but it would be impossible to segregate tenting and bathing without discriminating against the gay Scouts.  To be fair, there are already gay boys within the ranks who are engaging in camping and other Scouting activities alongside their fellow Scouts without any problem.  But this could be attributed to a boy’s trying to hide his homosexuality from the other Scouts.  If homosexuality is an acceptable behavior, would gay boys continue to be discreet about it?  Regardless of your stance on the issue, this is something that has to be considered and appropriate rules put in place.  Other wise it could lead to an incident that could be emotionally devastating to all boys involved.

The solution that the BSA seems to be favoring is to leave the decision up to the local units, based on the criteria of their chartering organizations.  This will leave individual troops vulnerable to lawsuits if they choose to exclude gay members. As long as the National Organization is will to offset the legal costs to these troops it may be the best alternative.  Solving the problem at a local level will make it possible for gay boys to form their own troops if there are none available.

No matter what decision the National Organization makes, it faces an uncertain future.  If they decide to allow gay persons, they will lose the backing of the churches where so many troops are chartered.  Many Scouting families, attracted by the emphasis on moral behavior, will leave in droves, possibly crippling the Scouting movement.  If they do not allow gays, the organization will face an exodus of members sympathetic to the gay cause.  They will also face legal pressures from outside groups who opposed any organization with Christian ties.  Sadly, this is a battle the Boys Scouts of America should not have to face.  The Supreme Court ruled in 2000 that the BSA had the right as a private organization to establish its own policies regarding who it allows to join.  The state of California is proposing a law, SB323, that will strip the BSA and other organizations that exclude, gays, atheists, and others based on their religion, gender, or sexual identity, of their tax exempt status.  This will essentially prevent these organizations from being able to operate in that state.  This is wrong.  It is not the place of any government, local, state or federal, to remove an organization’s Constitutional rights, in order to promote a social agenda.  Indeed it should be society that will ultimately decide whether  the BSA is still relevant in today’s world, and it will be society that will pay the price should it decide that the BSA is not.