The Grownups vs David Hogg 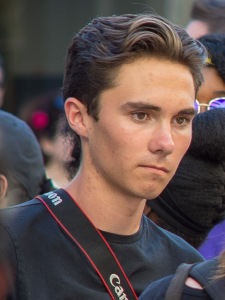 There has been a lot of talk about “common sense gun regulation”. Most of this talk is simply a back door way to introduce the banning of certain types of guns, which will ultimately lead to the banning of guns altogether. While I generally agree with the pro Second Amendment faction, there is one regulation that I am in complete agreement with and believe it should become law. I believe that the age to purchase a gun, any gun, should be raised to twenty-one. Let me explain why.

As science shows, and most parents of teenagers can attest, the frontal lobe of the brain, the “judgement center,” is not fully developed until the late twenties. Next to preschoolers, this makes college agers one of the most impressionable groups. The Left exploits this to push its agenda. From the Hippies of the Sixties, to the Antifa movement today, the Left exploits the idealism and lack of life experience this group possesses to further its agenda. College campuses have ceased being places where young people gain wisdom and life skills to become Progressive indoctrination centers. The entertainment industry reinforces the agenda, and social media gives this group a place to sound off with the like-minded, instead of having face to face conversations with those of differing viewpoints.

Now, since the  Parkland Shooting, the Left is using these youngsters as spokes persons.  They treat them as experts with authority and allow people who are barely more than children to shape policy.   Regulations that will affect our way of life could be dictated by young people too naïve to know they are being used, and that should frighten us all.

You see, it really isn’t about raising the age to buy a gun, it’s about raising the legal age of adult hood for everything, from buying cigarettes to voting.  Especially voting. It may be  one of the most effective ways to combat the Leftist indoctrination of our young people. One argument against raising the age of legal adulthood is that if you can serve in the military at eighteen you should be old enough to vote.  This is easily solved. Military service should confer legal adulthood on you. If you can show a valid military ID, or DD214 showing an honorable discharge, you can drink, buy a gun and vote. No matter your age.

I am not anti-youth I know there are exceptions.  Many parents have been much more successful than I at combating the Leftist influence in their own homes.  I am encouraged by the young adults who are turning from the lies of the Left, but the numbers just aren’t there yet to stop those raised with an entitlement mentality, who truly believe that those in my generation have caused all their problems and the government is the only solution.  Even our Founders realized that life experience is a necessary component of leadership, that is why you have to be at least thirty-five to become the President.