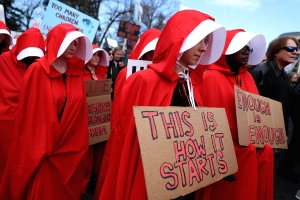 There is something compelling about dystopian literature. For all the bleakness of living in various totalitarian societies, there’s always that one person who dares to hope. Who courageously fights against the evil overpowering them, sometimes in vain. Such is the heroine Offred, in the Handmaid’s Tale.

Like any good dystopian fiction, you read or watch and see the parallels in our own society. Margaret Atwood didn’t just imagine what the future could look like, she used real examples, things happening even today in various parts of the world to bring realism to her story. The Handmaid’s Tale makes for riveting television. The story is captivating, it is well written and acted. What it isn’t is original………or brave.

At its core the Handmaids Tale is trite, and unimaginative. It’s simply another version of the well-worn, overused theme that Fundamentalist Christians are a cesspool of hypocrisy that subjugates and devalues women. Never mind that women in Western nations, (you know, Christian nations) have more freedom and opportunity than women anywhere else in the world.

To be truly audacious how about a tale that is frighteningly close to becoming reality. A story of life in a Sharia inspired America. Instead of reimagined nun’s habits, the women would wear stylized burkas, men would read from the Quran before raping their servants, and instead of Gilead, we would now be called New Mecca.

Or how about a radical Feminist utopia. A nation run completely by women. Men could not own property, hold any position of authority, or vote. They would live in squalid colonies, waiting to be chosen to donate sperm which would then be artificially inseminated into women ready to bear children. Sex for pleasure would only be allowed in lesbian liaisons with other females. Children once weaned would be turned over to the state to be raised and educated. Freeing the women from the burden of child rearing so they could pursue lucrative careers or artistic endeavors.

Pushing the envelope in Hollywood obviously doesn’t mean what it used to. You would not find any producer or studio in Hollywood interested in making a movie with the above-mentioned themes. In this day of attacks on Charlie Hebdo, the pink hatted women’s marches and violent Antifa protests, I doubt anyone in the entertainment industry has that kind of courage anymore.